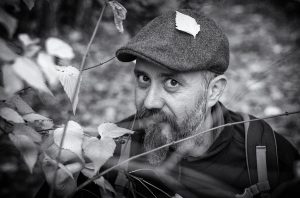 … lives in Skopje. Macedonia. He is interested in the forms of expression themselves. Total melancholic. Or sangvinic? Depends on the moment u make your first impression. Sagittarius. His temper navigates by the moon. Sometimes he does take pictures. In love with the black art – the wet plate collodion process, and other analog, alternative processes. He says he is still a better cook than photographer. He is more charming and sounds smarter when he writes than when he talks. He knows the answer when he is left alone. Often he finds himself in some processes of exchanging knowledge, experiences and skills. He is convinced that this whole universe is a jolly game, or better, a joke. His life is so much like Faustian cliche, but he likes to describe it more dramatically as surfing between the alter ego’s of Homer Simpson and Huckleberry Finn. He feels rather foolish to write about himself from third person view.

Participated at over 80 group exhibitions worldwide and been awarded more than he deserves. Had eleven authors exhibitions so far.

feel free to write about anything @ hakfin[@]gmail.com